Take a bunch of the Bay Area's hardest-working broadcast journalists...add the pure joy of music...and there you have it: The Eyewitness Blues Band!

Born out of a story assignment in 2006, the band has played

more amazing gigs than anyone has a right to expect. Among other appearances, they’ve opened for Bill Clinton and the Doobie Brothers (separate events), helped set a new guitar-playing world record, and entertained inmates inside San Quentin State Prison.

Guitarist/vocalist MIKE SUGERMAN reported for KPIX-5 and KCBS Radio before his move to Brooklyn.  His musical career began at age 7 when his mother made him take piano lessons from Aunt Seale. He hated the lessons and faked being sick to avoid going. He has seen many rock shows over the years, remembering only a few. Once, he believes, he lit a match during the playing of "Free Bird" at a Lynyrd Skynyrd concert. As a journalist, he once had his eyeglasses broken by Mick Jagger.

Guitarist STAN BUNGER is the morning anchor emeritus at KCBS Radio. His trombone solo performance of "Erie Canal" is still discussed in reverential tones at San Jose's Dartmouth Middle School, and many observers were shocked when Bruce Springsteen did not invite Stan to perform the song with him on his "Seeger Sessions" project. Careful observers of the band will note that for Stan, "three-chord rock" may be a bit of a stretch.

Lead vocalist JOE VAZQUEZ was a longtime reporter for KPIX-5. Before the Eyewitness Blues Band, he had absolutely zero experience with live music performance. No famous relatives. No Beatles or Rolling Stones brushes. Nada. Unless you count thousands of songs in the shower. And hundreds of karaoke appearances. And you might as well count the dozens of times he jumped up on the stage with house bands at bars and wedding receptions. 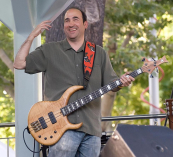 Bassist DOUG SOVERN is the political reporter for KCBS Radio. He thinks this is the 12th band he has been in, but after all that rock and roll, who can really remember? Doug learned to play acoustic guitar, sort of, at the knee of his grandmother, the fastest-fingered balalaika player ever to come out of Ukraine. His mother is an accomplished pianist and singer. His musical career began in earnest when he took up the bass in high school. In college, he played in a variety of new wave, punk, R&B and blues bands.

Lead guitarist CHRIS DETRICK is too smart to work in the broadcast news business. We call him our "citizen journalist". Chris has been playing the guitar since he was in the 6th grade. He has a degree in music from UC Berkeley, and was working as an instructor at Bandworks when the rest of the band showed up to learn how to work and play nicely with others. Chris has a bunch of musical toys that make the rest of the band jealous, but he's good about sharing. He's a terrific musician and teacher.